A data-driven, digital approach to tackling damp and mould in rented homes

Following the Housing Ombudsman’s report calling for landlords to take a “zero-tolerance” approach to damp and mould in properties, FireAngel’s Specification Manager, Roger Whittingham, explores how data could support. 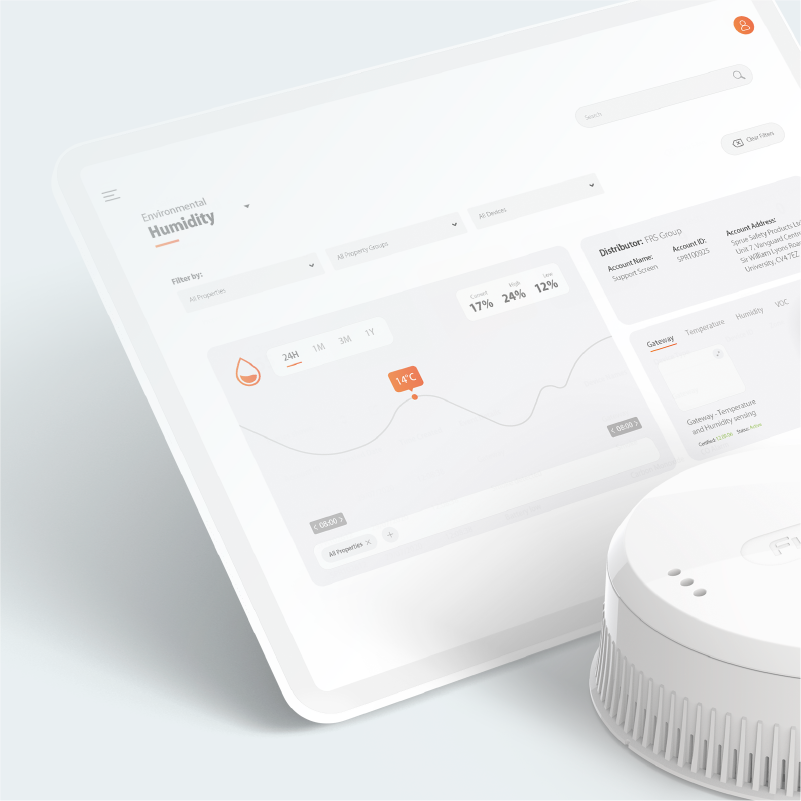 The Housing Ombudsman’s report ‘Spotlight on Damp and Mould; It’s not lifestyle’, asks landlords to be proactive in identifying homes that have or may be at risk of developing problems rather than putting the onus on residents to report an issue.

This follows guidelines outlined in the Charter for Social Housing white paper, where further pressure is placed on housing providers to offer high quality, safe homes in good repair – including tackling any complaints of damp fast and efficiently.

However, the 2019-20 English Housing Survey identified serious condensation and mould problems in at least one room in three per cent of all social sector homes (133,000) while five per cent of homes (192,000) lacked thermal comfort. It’s a growing problem in our sector, with more than a third of social housing and council tenants reporting damp and mould in their property and over 60,000 complaints relating to mould, damp or condensation received by local authorities between 2012 and 2018.

The impacts of damp living conditions on health and wellbeing

Cold temperatures can cause a myriad of problems within social homes, from burst pipes to structural damage, but more commonly, damp and mould.

Under-heated rooms that suffer from an excess of moisture are particularly favourable to mould, such as bathrooms and kitchens, where everyday activities like cooking, showering, drying clothes and even breathing, create moisture which can lead to condensation.

As a type of fungus, mould reproduces by producing microscopic spores that float on the air looking for a new home. These spores thrive on nearly any organic surface, as long as it has moisture and oxygen. This includes surfaces commonly found inside housing such as carpets, wood, furniture and materials used for insulation.

Damp living conditions can lead to serious health implications, with asthma sufferers especially at risk due to mould spores triggering symptoms. But the elderly, the very young and anyone who is immuno-compromised are also at risk of health complications.

According to the charity Shelter, poor housing harms the health of 20% of renters in England, with mould, damp and cold being the main triggers of sickness. This sits alongside other studies that have shown how under-heated homes are linked to the onset of mental health conditions such as depression and anxiety.

The cost to combat damp and mould

Alongside health complications, mould and damp problems also pose considerable cost implications to housing associations. Remedial fixes for small condensation issues can be high, with estimated damage to a property’s paint and plasterwork costing around £700 per property. This can often be followed by more expensive improvements to combat the cause of condensation, damp and mould in a property.

Implementing external wall insulation and ventilation can cost around £1,500 per property, and when looking at the number of social housing properties in need of work – these figures will soon add up into the millions.

Then there’s also the threat of legal action from tenants. A recent case in south London saw a tenant secure a £3,500 settlement after several years living with poor conditions including the presence of damp and mould. It was the second time the resident made a housing claim against the London borough due to ‘recurring issues’.

Although the Ombudsman recognises it’s a daily challenge for landlords to tackle this difficult problem, the report advises against placing the blame on residents due to ‘lifestyle’. Instead, the document identifies 26 recommendations for landlords to implement.

One of these recommendations is to use a “data driven, risk-based approach with respect to damp and mould. This will reduce over reliance on residents to report issues, help landlords identify hidden issues and support landlords to anticipate and prioritise interventions before a complaint or disrepair claim is made.”

There are a variety of new solutions available that enable housing providers to take a data driven approach to monitoring humidity and temperature levels in a property to proactively tackle condensation, damp and mould. By utilising IoT sensors in residents’ homes, it can provide real-time data on a property environment, enabling early interventions to pre-empt a problem getting any worse.

These unobtrusive temperature and humidity sensors can create a holistic view of a property environment. Devices capture humidity and temperature data, providing real-time information for housing providers to actively review and spot any environments where mould or damp could easily develop.

Housing providers can then deliver tailored support to tenants and provide accurate information about where they need to prioritise maintenance, such as installing better ventilation or insulation, or identifying residents who may benefit from referrals to fuel poverty support groups if they need further help.

Data collected from IoT sensors will also play a role in future regeneration projects. Analysing the data for trends and patterns can show housing providers which regions or properties are particularly prone to damp (such as those in coastal areas) and ensure those properties have the right insulation and ventilation installed. However, all this requires the right technology.

With FireAngel Connected, housing providers can create a tailored network of sensors and devices to detect everything from fire and carbon monoxide, to water leaks and room occupancy. IoT devices and sensors are wirelessly connected to the platform through our New Generation Cellular Gateway using Smart RF and Zigbee technology.

Housing providers can then access each device’s data using our intuitive dashboard, allowing them to identify environments that could lead to damp and mould. Humidity and temperature data can be integrated into housing providers’ existing asset management systems, enabling them to easily spot trends and allocate resources more efficiently. And as we’ve designed our gateway to use cellular signals alongside a wi-fi back-up, housing providers can be confident that it’s always on and always connected.

By acting early, housing providers can stop costs escalating. Damp is less likely to become an expensive headache to fix, and with better living conditions, tenants will feel more comfortable and safer in their home environment.

To find out more about FireAngel’s Cellular Gateway or about our Connected platform, please get in touch with our team of specialists.